You can find out with extreme accuracy using the services available at PriceThatCoin.com.

Here’s a table of coins worth getting checked out. If you’re not sure if your coin is in this grade or if it is problem-free, ask the professional numismatists at PriceThatCoin.com before having it certified by a reputable TPG.

Have a coin of this date, but you’re not sure how it grades, or if it’s problem-free? Submit your coin to PriceThatCoin.com for a Numismatist’s Professional Opinion. 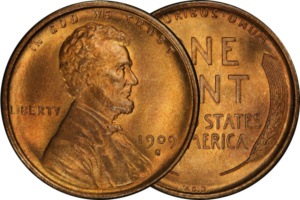 What is a 1909-S VDB Lincoln Wheat Cent Worth? Something! It depends on condition. There are a lot of fakes, so before spending your money on certification, solicit a Numismatist’s Professional Opinion.

Most real, common date Lincoln Wheat Cents are worth between $0.02 and $0.20. There are a lot of counterfeits of valuable coins! Faked Lincoln Wheat Cents (altered dates and mint marks, cast copies, doctored coins) have been around since the Mint started making them in 1909, so don’t think just because you know the history of your coin going back 50 years, it’s not fake.

Common date Wheat Cents in average circulated grade are extremely common. The U.S. Mints made them literally by the billions. By the 1920s, Philadelphia put out over 100,000,000 Lincoln Wheat Cents every year, and by the 1940s, total mintage output reach close to and sometimes surpassed one billion coins per year. It’s actually still quite easy to find mint red rolls of Lincoln Wheat Cents from the 1950s.

Most common date Lincoln Wheats are in what numismatists (coin nerds) call Extremely Fine (EF/XF) to Uncirculated (or Mint State) condition. As circulated coins are numismatically common, average circulated common date coins (coins that were minted in high numbers by a given U.S. Mint at Philadelphia, Denver, San Francisco) do not have considerable value. 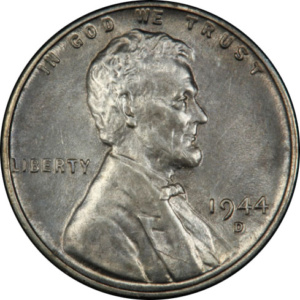 What’s a 1944-D Steel Wheat Cent Worth? A lot! But there are a LOT of counterfeits. And 1943 Lincoln Wheat Cents from every mint are extremely common, and not worth a lot. Before you submit your coin for certification, you might get a Numismatist’s Professional Opinion.

Wheat Cents often have problems severely impacting their value. We see polished coins, pvc coins, dipped coins, and artificially toned Wheats. By a large margin, the most common Cent problem is that the coin has environmental damage. Copper is quite reactive, so coins discolor and corrode much more quickly than coins of other metals. All of these issues substantially impact Wheat Cent values as the almost all coins are common.

There are uncommon dates and there are common date coins in uncommon condition. Generally speaking, if you have a teen Wheatie in Mint State red (note: telling the difference between cleaned and Mint Red can be tricky for the inexperienced), it may be worth having that coin certified, particularly if it is an earlier date. Get a numismatist’s professional opinion if possible before submitting for certification. We see a LOT of teen Wheat Cents in lower grades – they have to be pretty nice to have substantial collector value.

If your coin is not on this list, it may not be worth spending the money to get it certified. Get an unbiased numismatist’s professional opinion if you’re not sure. If it is on this list, you should get a professional numismatist’s opinion to see if it’s real (there are tons of counterfeits out there, most of them very good) and to determine if it’s in a good enough condition to justify spending the money for certification (authentication, grading, and protection.)

For the sake of our list, we consider coins with a collector market value (numismatic value) of over $100 valuable enough to consider sending in for certification.

A word about Proof Lincoln Wheat Cents:
Even to the experienced numismatist, the Matte Proof Cents of 1909 to 1916 are tough to pick out. If you feel you have a Matte Proof, it’s best to have the coin certified as such, understanding there’s a good chance it is not a proof.

If it’s not an early matte proof Lincoln Wheat Cent, it might not be worth a lot of money. To find out, submit the coin to PriceThatCoin.com for a Numismatist’s Professional Opinion.