Probably the biggest piece of coin news at the moment is new speculation that the pewter Continental Currency “Dollars” are not what we’ve thought they were.

David McCarthy of Kagin’s is stirring the pot again, calling into question the origin of these wonderful pieces. (No matter what side of the argument you land on, these things are indeed fantastic!)

But, this speculation may certainly (and perhaps already has) impact the value of these important pieces of Early Americana. 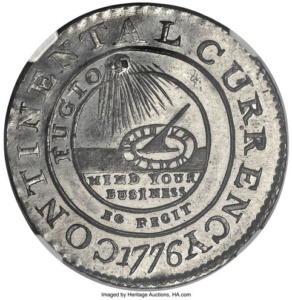 A Continentnal “Dollar” dated 1776 may have been a commemorative token created in Europe. This change of status may have a significant impact on its importance to collectors, who until now wanted to believe it was a trial piece created in and for the young United States of America.

For quite some time, numismatists have held hopefully, without supporting data, that these pewter “Dollars” were among the first coins made for and by the nascent United States of America. There was no documentation to support this fact, but we liked the idea, and so we accepted it.

Kagin and Goldstein decided instead to look at the cold hard facts and have decided that direct evidence from the period suggests that these coins are commemorative medals or tokens, made in Europe.

This takes the status of the Continental “Dollar” from, “perhaps the first dollar coin made in America” to “a commemorative medal made in Europe celebrating the New United States.”

To go from being a bucket list item for every silver dollar collector on the planet as a coin made in New York to being a commemorative medal or token not made in the U.S. is a pretty severe step down.

And the auction price reflected it. This piece realized nearly $450,000 in June 2018 compared to nearly $550,000 just 6 years ago. It could be a softening coin market with the graying of the boomers divesting from their collections and investing in longer life or more life experiences. It could be the numismatic market portending a coming recession.

Or, it could be a hit in status for the piece, no longer the first dollar and now just a European Commemorative piece of exonumia.

Any way you look at it, this is among the finest of its type. NGC grades the coin Mint State 67, which is of course spectacular for any piece of early America.

We’ll keep our eye on the market. This could be a golden opportunity for the next generation to buy in to coin collecting (as it always does) and get great pieces with leaner budgets. It’s always best to buy on the downswing. Making buys at the trough is tough to time. Those who try to often miss out, trying to be clever. And any way you look at it, this piece is no longer at its apex.