Last week, we compared the Proof 66 Eliasberg (single-finest-known) 1913 Liberty Nickel to a couple of other major collectibles that sold around the same time. When you look at the absolute pinnacle of rarities in other fields, the 1913 Nickel didn’t really fare all that well. But when you look at the fact that there are a LOT of Liberty Nickels, comparing the 1913 to almost-pinnacle rarities shows that it really did quite well.

First, the 1854-S $5. Only the 4th known to exist. It sold for just north of $2M, proving that gold collectors gotta have it. Two of the four live in museums, so this was a possibly once-in-a-lifetime opportunity to own a coin that almost nobody else has. And to be frank, it’s not even all that nice. Unlike the 1913 Lib Nickel, this coin (as most coins from this period would be, and all XF gold is) is rather beat up. When will it sell again? Gosh, that’s hard to say. As for valuation, it seems $2.16M is all that the market would bear for a less-than-choice coin. 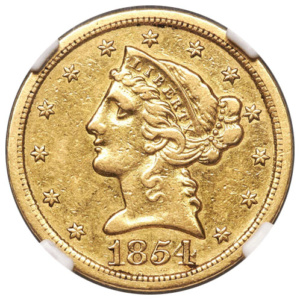 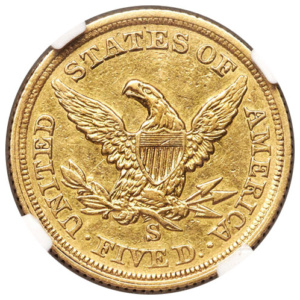 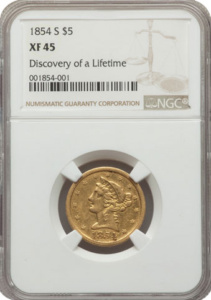 NGC curiously states that almost no gold was shipped to and from the West Coast in bar form. Well, we know definitively that’s not true because of the Central America. There were quite a number of assay ingots on that ship, telling us that much of the San Francisco gold did indeed end up at the Philadelphia Mint.

But what of this rarity? From the look of it, it appears to have been used a bit in circulation. Perhaps a large shipment of 1854-S Half Eagles was melted on the East Coast or in Europe or Asia, but record was lost. Whatever the case, this little coin seems to have escaped that fate and made into general use.

And yet another once-in-a-lifetime opportunity arose that week: the 1792 Washington Gold Eagle. This time under $2M. 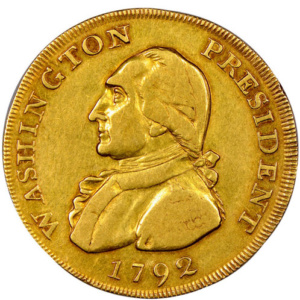 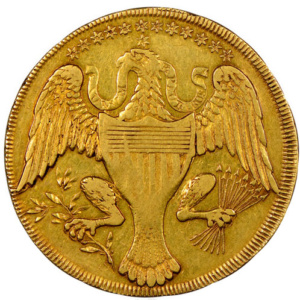 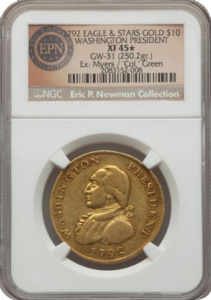 It was Newman’s favorite coin. He thought it was the original G.W’s pocket piece, despite there being much substantial evidence to support the claim. But, we numismatists tend to be romantic historians, and it was his coin – he could believe whatever he wanted to believe! Nobody here was going to argue.

There were further “definitive claims” that the coin was made in the nascent U.S. of A. But these definitive claims are a bit of a stretch to most people here. Again, no reason to argue. Things may point that way, and if the new owner wants to believe it, we’re not going to stop them.

The only coin in the world like it. And, this time in choice XF condition – just a beautiful coin.

One could argue it could be on the level of a Brasher Doubloon – a much more valuable piece. Others would argue they need more evidence than romance to pony up 8 figures for it.

Any way you look at it, like the 1913 Lib V, these don’t paint a rosy picture of the numismatic market. These are certainly not terrible results. But as the rare stuff keeps getting rarer, it seems these monstrous three weren’t rare enough alone to pull the top of the market to new heights. We have a soaring, yet tenuous economy with a strong dollar. There wouldn’t be too many foreign bidders on these coins anyway.

The feeling around here is, “well, that was exciting. I guess that is what it is.”