The old adage goes, “buy the best you can afford.”

1853 Arrows & Rays, a true favorite of many collectors, have proven a fascinating market study. There’s no question the reverse twinkling flashes coming off lustrous rays surrounding the eagle are absolutely captivating and unique in U.S. coinage, even going back to the beginning. Just beautiful. 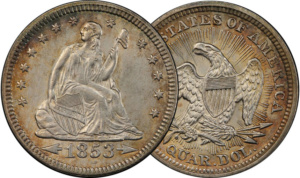 1853 Arrows & Rays Seated Liberty Quarter, Mint State 63. The only year of the type, but with a healthy mintage and plenty of availability in all grades but 67.

So many times we see people try to pass off 1853s as key dates. Which I suppose technically speaking, they are, as it’s a single year type. This is the only year of the rays eagle. So it’s a type coin you should have. But with a mintage of 15M, this is no key date for the Seated Quarter set. It’s not a scarce coin – especially as so many were saved. There are some wonderful varieties of the type, too – making this single year an interesting piece to collect on its own.

Looking back to the 1960s, Good 1853 quarters could be bought for under $5. Today, problem-free goods can still be bought around or even under $20. So that’s a multiple of 4x in over 50 years. Not fantastic.

VFs are the same. XFs and AUs aren’t far off.

Unfortunately, since then, they haven’t done much to keep their luster – depending on the grade you’re looking at. A decent low-end Mint State example will cost you under $1000 these days. But who wants low-end MS?

Now, again, if you got into one in the 1960s, good on ya! As discussed in an earlier article though, you’d have been better off in a GTO or a Master painting.

There are some 63s out there, and there is sufficient supply (a couple hundred total pop) that a few come up at major auctions every year. So for the patient collector, there are plenty of options.

So what about the pointy end of the pop? Oddly, they haven’t done much better. 67s (of which there are few), of course, should always do well because of Registry Set collectors. But looking at the past 15 years of public auction, the data is noisy, but does show a slight upward trend. Since the early-to-mid 2000’s, a 7 can be bought for $50k. And that really hasn’t changed much. The last record was just under $70k, but that was back in 2013. Hard to say what one would bring today. Now if you got your spectacular gem in the ’70s or even 1990s, you’ve done fine.

So, if you’re really interested in investing in coins, don’t always buy the best you can afford. Do your research before you jump in. In general, it’s a true-ism – but not always!

What is true is that you should love what you collect. If money can be secondary, the joy of curating the beautiful will always be paramount.