This week, we look at 3-Cent Nickels.

The numismatic market is a bit all over the place today (as my colleagues have noted here in this column in the past). As you know by now if you’re a regular AoC reader, the finest coins are accelerating in value and the next-to-finest are sometimes falling, so I won’t try to speculate which coins make the best long-term investment. (Though, I do have my ideas.)

Instead, I’ll focus on coins that seem to offer a great buy for their beauty. This is a similar approach to what my friend and colleague wrote last week, when supplying you with a Seated Liberty Dime Type Coin Guide. You could use the information I’ve researched and will share with you today for the same reason – to maximize your buying power whilst selecting a stellar Proof Three-Cent Nickel Type Coin.

I’ve broken my market analysis into two parts: low mintage and high mintage. That way you can decide what is more important to you: ultimate value or a coin with more numismatic interest, and you can compare the categories to each other. 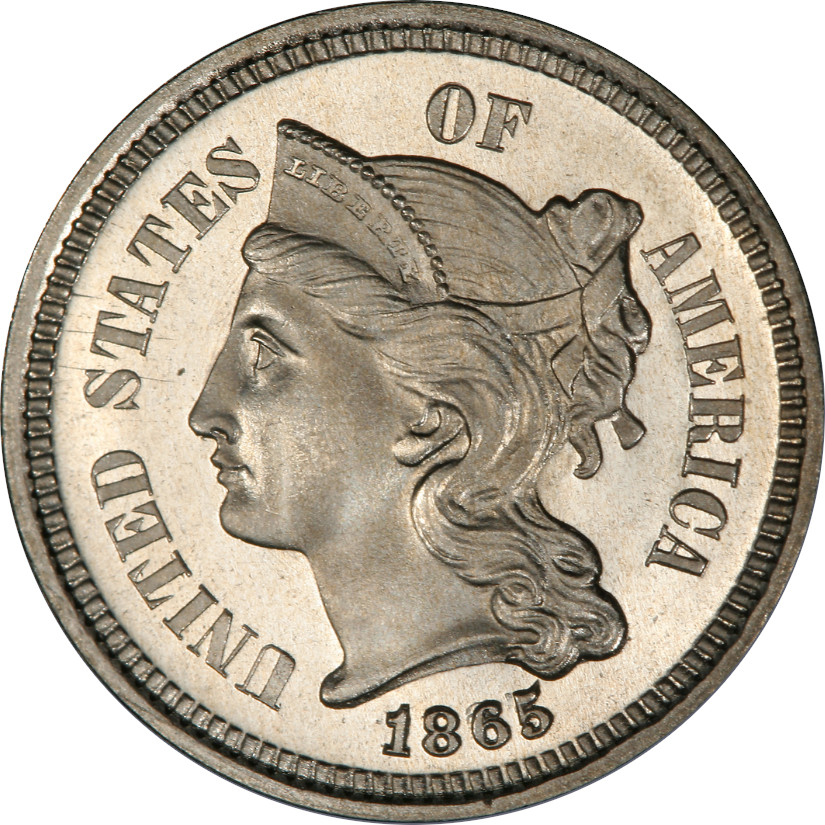 1865 Proof 3-Cent Nickel, Proof 67 Deep Cameo, Obverse. This is one of the most expensive (and desirable) coins in the 3CN Proof Set. Note overdate or date repunching remnants even in this obverse proof die. 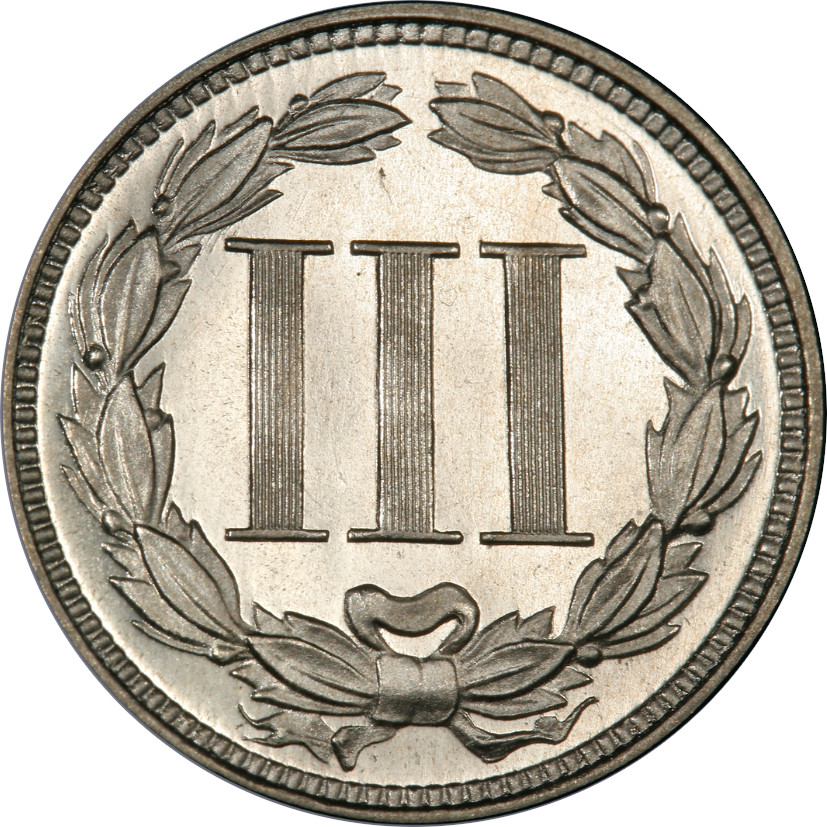 1865 Proof 3-Cent Nickel, Proof 67 Deep Cameo, Reverse. Interesting that even in proof, the 1865 exhibits weak strike in the Roman Numerals.

For low mintage Proof 3-Cent Nickels, 1865 is the year to get. This is not really a bang-for-your-buck coin in any grade, as the prices for which these coins are selling is often a multiple of any other year. The mintage is lower than for any other year, also, with something like 500 minted. 1865 was before coin collectors had really begun pushing the Mint for proofs for their personal cabinets.

The result is expensive coins. The most recent sale of a Proof ‘7 Deep/Ultra Cameo was a PCGS coin that Legend sold for $23,500. That’s not a bargain for most collectors. But this is one of the ultimate Proof 3CNs, and you’ll have to pay for it. This is the high watermark,  though Proof 68 Ultra or Deep Cameo coins have been certified from other years, including a low-mintage year of 1866.

Dropping a grade point and a proof strike designation down, 1865 Proof 3-Cent Nickels in Proof 66 Cameo are more plentiful and considerably more affordable, in the five-thousand to seven-thousand dollar range, in recent years. This is quite a bit lower than the type’s value high apex in the mid-2000s, so they may now be a relative bargain. The cameo designation is an interesting consideration, too, with a lot of gray area afforded by different graders. Some coins look ultra cameo in-hand and some have a varying obverse and reverse cameo contrast. Either way, if you have to have an 1865 example and you can afford $10,000 for your coin, Proof 66 Cameo is a great grade to start your search.

Proving that everyone loves a first-year piece, 1865s in Proof ‘4 are still almost half what you will pay for a ‘6 Cameo coin at under $2,000. That’s also three to four times what you’ll pay for almost any other year 3-Cent Nickel in Proof 64. So if you don’t have to have that desirable 1865 year, you’ll get a better looking coin of almost any other year for the same price or less.

One numismatically interesting feature of genuine 1865 Proof 3CNs is that they have three strakes running from the dentils into the field around STA in STATES on the obverse. These were evident in the type trials and patterns leading up to coinage, also. If you don’t find this interesting, but rather, unattractive, seek other years – especially in high grade. 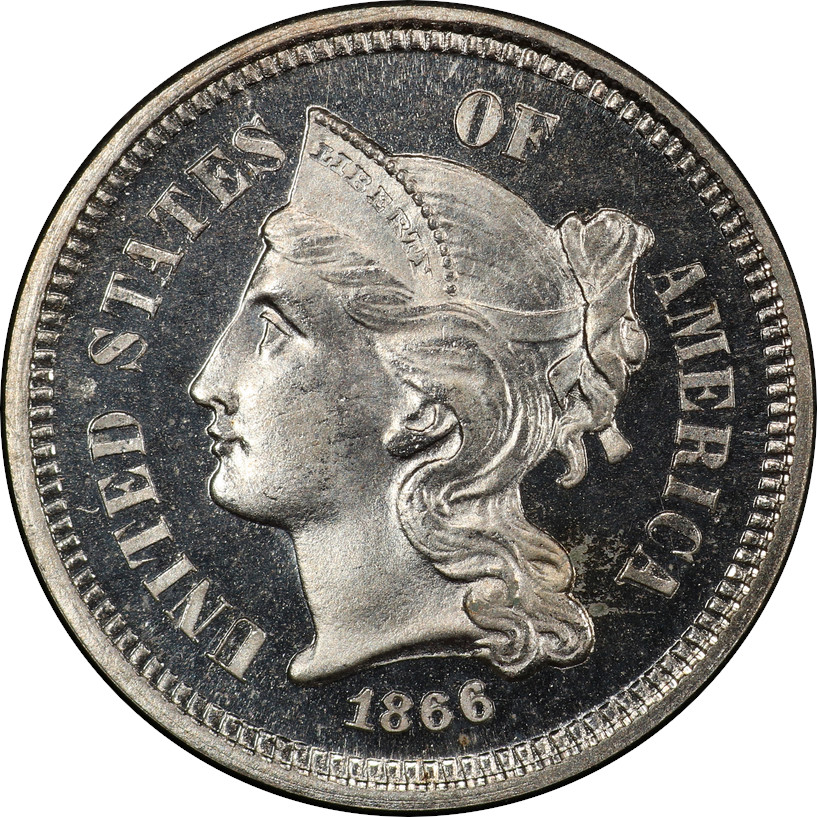 Continuing with lower mintage years, 1866 saw the minting of just 600 or more Proof 3-Cent Nickels. Prices are substantially lower than for 1865 in all grade but Proof 67 Deep or Ultra Cameo. That’s because there is a coin graded Proof 68 Ultra Cameo, and it hasn’t sold recently in public auction. Stack’s Bowers recently sold an NGC-certified 1866 Proof 67 Ultra Cameo example for $14,400. That’s substantially less than the estimate of an 1865 in the same grade. In Proof 64, they routinely sell for around $500. 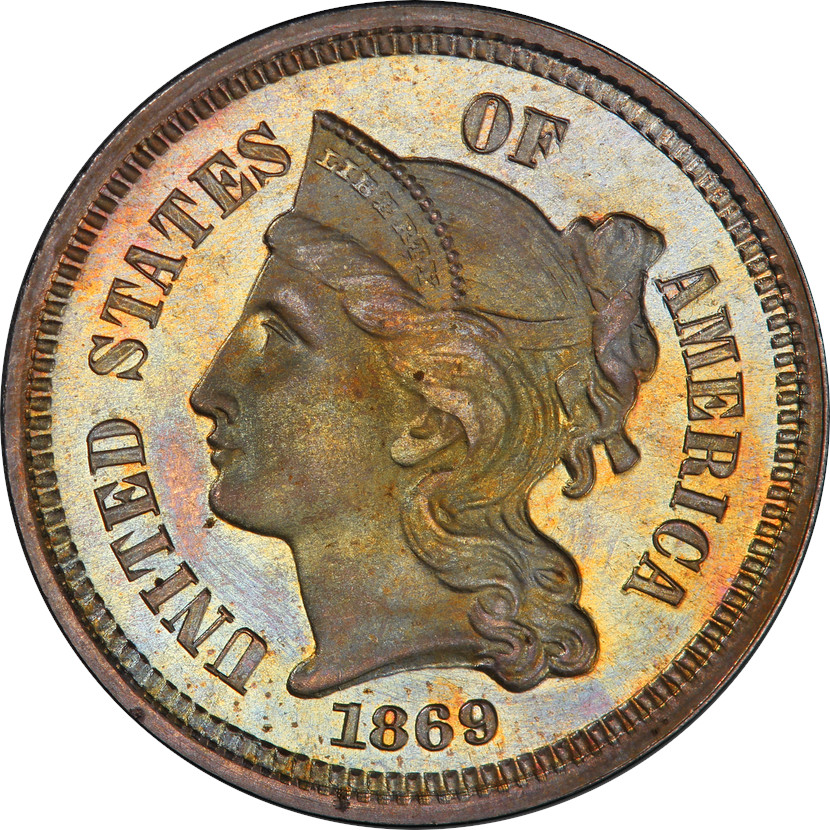 Even less expensive than 1867s are 1869 Proof 3-Cent Nickels. Still with that 600-ish mintage, you can buy a Proof 65 Cameo coin for under $1,000 (perhaps less than $800). Proof 64 coins (no cameo designation) are just $300! That’s a pretty phenomenal buy for a proof type coin with a low mintage, and from the 19th Century. And if you want to spend even less, there are some coins graded impaired proof (for example, Proof 58) available.

Here’s a word of caution for all 3-Cent Nickel collectors: look out for impaired proofs being passed off as business strikes. As we said 1869 3CNs graded Brilliant Proof 64 sell for $300-ish. Well, 1869s graded Mint State 64 sell for the same, perhaps a little bit more. (Not that they look anything alike with the same numeric grade – a proof graded as a business strike might well garner a couple of grade points higher.) And nefarious coin sellers (they exist, sadly) have tried to pawn off dulled down proofs or proof only-issues as uncirculated business strikes for years. This is one reason we owe a debt of gratitude for certification.

Some people love that 1877 year because it’s such a fascinating year filled with key dates and semi-key date coins. 1877 Three Cent Nickels aren’t a particularly good buy compared to their counterparts at any grade. But if you like that year 1877, it’s a coin to consider.

1878 has a particularly good value to research in the grade Proof 66 Cameo. These coins are in the range of $1,000 to buy today. There is a substantial jump to Proof 66 Deep/Ultra Cameo, so finding a nice Cameo example that has any other choice features (a “+” Grade, or a CAC sticker, for example) will likely cost you quite a bit more.

1883 has the highest Proof mintage of the bunch, at 6,609. That’s higher than the business strike mintage from the same year of just 4,000 coins. There are, accordingly, a few grades to consider. 1883 Proof 3-Cent Nickels in Proof 65 Cameo are relatively plentiful and therefore possible to purchase in the range of $500. That’s a great buy for any classic gem proof cameo! But the truth is, all of the 3-Cent Nickels from around this time can be purchased for about this month, so you might feel better getting a different year. Proof 65 coins (no cameo designation) are just a little less expensive, so you might as well pay a little more for cameo, if you find the coin graded properly and eye appealing.

1886 was another proof-only, high mintage year for 3-Cent Nickels. They are slightly more costly than 1883s in all grades. And then you’ve procured yourself a not-most-common date. I find it further interesting that not many proof coins from 1886 have been certified Deep or Ultra Cameo. 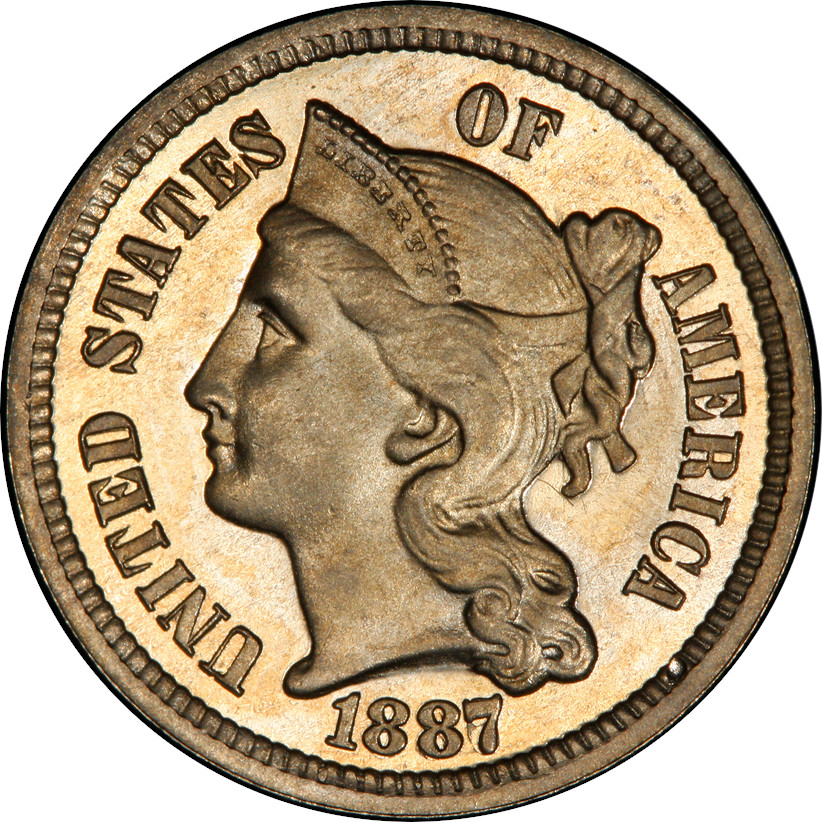 1887/6 Proof 3-Cent Nickel, Proof 65 Cameo, Obverse. While not the most affordable example of 3-Cent Nickel, the numismatically interesting overdate makes the 7/6 Strong a compelling example for variety collectors willing to spend just a little bit more.

The last interesting coin to consider is for us variety collectors. They’re not a particularly good deal compared to other coins from this proof series, but they’re perhaps surprisingly not much more expensive, either, considering. A good Proof 65 Cameo 1887/6 Strong Overdate 3-Cent Nickel will cost you “only” $1,000, perhaps less. That’s a very special coin for variety collectors, and one in excellent condition.

It’s also true that you can get a Proof 63 or Proof 64 coin for under $600. That coin will likely look like an excellent example of a business strike. That means a lovely coin in excellent condition (likely no strike issues that plague the type) that is a relative bargain. Especially considering the numismatically interesting overdate.

So there you have it. As you seek your perfect Proof 3-Cent Nickels, you have a few coins to consider. Toning isn’t typically beautiful on coins like this, so if you do find a naturally toned example, certified, expect to pay more.