It was as if millions of coin collectors gasped in shock and were suddenly silenced. I fear something inexplicably inexplicable has happened. 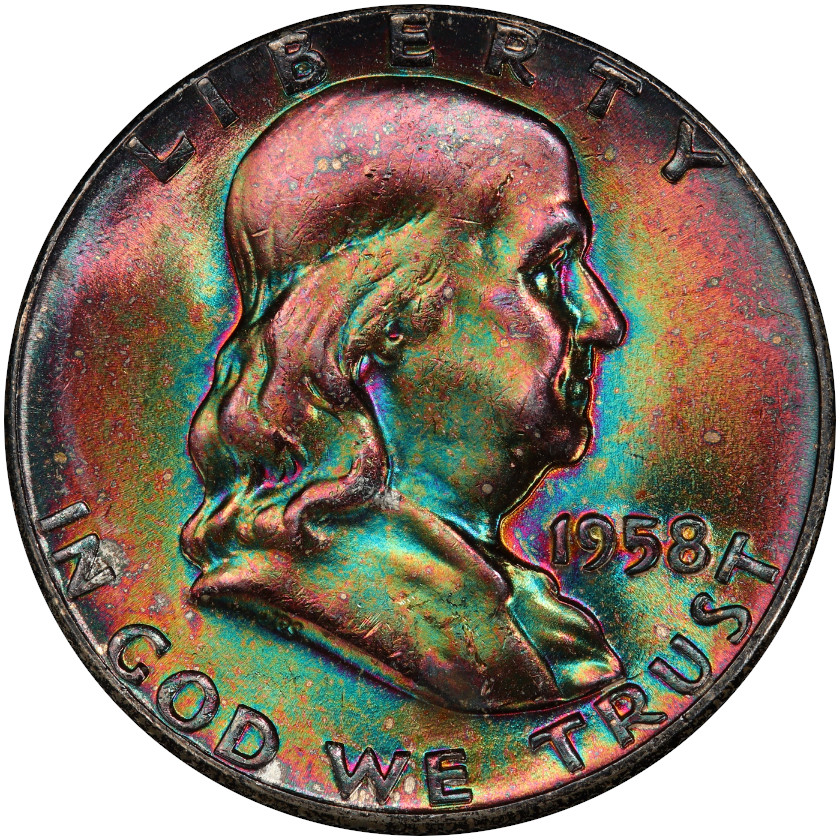 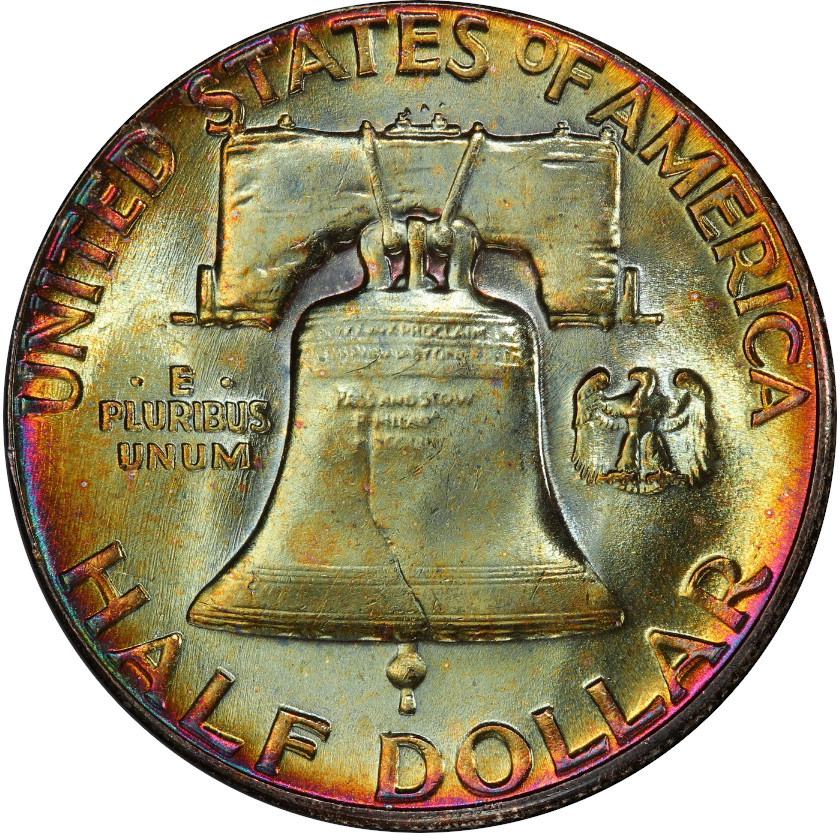 Well, lots of reasons. Mostly, at least two people decided they had to have the coin for their collections.

The color on the coin is natural, if not common. When people haven’t seen color like this, they find it unbelievable. And this coin redefines the limit of what is believable. This coin is naturally toned. This is not artificial toning, or if it is, it’s very, very, VERY good. What further makes it phenomenal is the coin’s age – we seldom see such colorful coins so young. The bright neons are not common either.

The grade of the coin is too high from the technical standpoint. It is one of three 1958 Philadelphia issue Franklin Half Dollars to achieve the grade of Mint State 67+ (NGC grades one coin MS 67+*, PCGS grades two coins MS67+).

The grade is arguable – whatever your opinion of the grading on this piece (this exact coin was more appropriately graded Mint State 66+ not long ago) – it therefore takes a top spot in the Registry Sets of the universe.

Another facet that is fascinating about this Franklin: that it was recently regraded, has technical imperfections beneath its current grade, and yet… CAC agreed to it.

I don’t mean to sound like a conspiracy theorist, but: is there a larger marketing venture going on here, by the CAC founders? Maybe. Maybe not. The coin’s surfaces are obviously, to any idiot, not “1000% perfect.” (In hand, it’s much better than these unforgiving photographs. But the surfaces are obviously not perfect.)

Is there a larger coin collecting conspiracy going on here to keep the collectible coin market exciting and in the news? I hope so.

So it’s not the finest Franklin Half Dollar, for certain. But it is among the top few hundred. And it is the most colorful. In hand, the coin is spectacular, with incredible luster dripping through its easter egg colors. But it’s not flawless. It’s also not the finest Franklin Half Dollar – not by a long shot. It is one of the best struck in a high grade.

That said, at least two people (perhaps more) consider it to be the most beautiful Franklin Half Dollar they have ever seen, and they Wanted it, like, WANTED it, for their collection.

#4) Super Sets in the Works

The previous record for a Franklin Half Dollar (public auction, anyway) was for a Franklin Proof sold by Heritage, in the $85,000 range. So 6 figures is not inconceivable.

Further, a number of auction records for beautiful Franklin Half Dollars have been falling in recent years – often doubling price guide. But this coin sold at 10 times PCGS price guide. So somebody, or somebodies, are after a phenomenal Franklin Set, and they’re not being timid.

Will the Records Continue to Fall?

Perhaps. The generation of collectors born in their ’50s is the generation that seems to most appreciate the Franklins. Should a ’51-S in ‘7+ Full Bell Line come up to auction, it will be a hard-fought piece, as there is only one certified by PCGS. NGC has a star in 7, but no pluses. And there hasn’t been a ’51-S to come up for auction in a while. If it’s regraded, will it gradeflate to 8, as this particular coin 6+ gradeflated to 7+?

The Boomers born in the ’50s have money left (so long as the stock market keeps bulling along) and they have a couple of decades left to collect, so the records may not be over for Franklins – for now.

But in 30 years, when this generation is finished selling off their wares, will the next generations pick up the Franklin flag and fly it?

Possibly. But the next generation seems more attracted to Capped Bust Halves and Walkers. So only time will tell. For now, the ultra-high-end Franklin Market may have some space to go up. May. If the stock market finally crashes or the coin market simply runs out of top coins, Franklins may go on hiatus and have to pick up where it left off in a few years.

The point is this: Keep your eye on the high-end Franklins. There may yet be more fun to come.