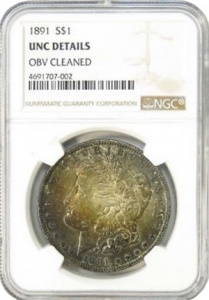 An example of NGC Details coin slab. This coin will trade for considerably less than a non-details (problem-free) example. 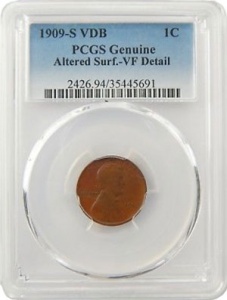 An example of PCGS Details coin slab. This coin will trade for considerably less than a non-details (problem-free) example.

If you’re unsure if your coin is a problem coin, the Academy of Coins© has created an easy, quick, low-cost grading service alternative at PriceThatCoin.com.

PriceThatCoin.com is a much faster, less expensive way to find out about your coin than traditional coin certification. And if you should certify your coin, we’ll tell you!

If you would prefer to learn problem coins yourself, continue reading. We’re here to help you learn…

One common misconception coin sellers have is that they believe “clean looking” coins will do better on the market. While untoned coins with completely original surfaces and bright, original luster often do well on the market, any sign of cleaning that removes original surfaces hurts the coin’s value considerably. Almost all collectors easily spot the common ways novice sellers attempt to clean coins.

Knowledgeable collectors have learned how to differentiate problem coins from problem-free coins and they have a keen eye for quality.

Third-Party Graders almost always note problems on a problem coin’s holder, grading it “Details”, rather than giving a coin a full, or numeric grade. Details coin values do not correlate with coin price guide values in any way. This is because the severity and number of problems impact the desirability of the coin in different ways to different collectors.

If a substantial number of problem-free coins are available, a problem coin of similar fineness will bring much less at auction. When just a few problem-free examples are available, a problem coin’s value may not suffer considerably. If the coin has extensive damage, collectors will almost always pay substantially less for a coin than they will for a non-damaged example.

Some Examples of Coin Problems

Fingerprints
Go carefully when handling your coins. If you leave fingerprints on your coin, over time, the oils eat into the metal surface. Most collectors dislike fingerprints. It may be possible to have your coin professionally conserved to remove fingerprints without damaging the surfaces, but often the damage cannot be repaired. This is especially critical with proof coins.

Environmental Damage
Environmental damage is often evident on coins that have been buried underground or left under water. The surfaces of the coin may become grainy or pitted.

Unpleasant Toning
A major concern coin collectors have regarding coins in their collection is “eye appeal”. It’s as simple and straightforward as it sounds. All other things equal, the prettier the coin, the more collectors will pay.

Other things equal, the prettier the coin, the more collectors will pay.

As mentioned before, the extent of the problems on a coin roughly, in combination with fineness, roughly correlate to the value of the problem coin. Another driver of market values for problem coins is the number of similar coins with and without problems.

A coin with beautiful, ‘natural’ rainbow hues radiating from the center often gets more aggressive bidding action than untoned coins.

Conversely, coins that have dark, mottled toning don’t have as much eye appeal, so they will not bring strong bidders. Dark toning may hide other problems and flaws that may keep a coin from a higher grade.

PVC Residue
With the proliferation of soft plastics in the numismatic market came an unknown enemy: PVC. This is the chemical in plastic that keeps it flexible and pliable (soft). PVC oils leach out from the plastic container on to the coin’s surfaces. Eventually, they eat into the metal. Most older flips are fine when stored in a dehumidified, cool environment. But older PVC flips, when exposed to heat and humidity, leach chemicals and ruin coins. Collectors should choose PVC-free flips for short-term storage.

Often, coins that collectors stored in PVC plastics and exposed to heat have a dull, green film on them. This is the PVC leaching out of the plastic and leaving a sticky, unsightly goldish-green residue on coin surfaces. It is sometimes possible to have this PVC film conserved off of the surface of the coin. Sometimes however, the damage has permanently eroded the coin’s surface.

Damaged and Repaired Coins
Some coins are made into jewelry. Collectors consider holed coins as severly damaged. As such, jewelers and others will often attempt to repair the damage with similar metal fillers.

The problem is that it’s almost always blatantly obvious, and as you know, collectors prefer coins with pristine, original surfaces. Damaged and repaired coins are typically some of the least desirable examples of problem coin.

Buying and Selling Problem Coins
Problem coins are often tricky for new collectors and sellers to understand. Inexperienced collectors think they’re getting a great deal when buying a problem coin, but many times, they’re not.

One of the great problems with details coins is determining fair value. Fineness usually plays a substantial driving factor in reliably determining a problem-free coin’s value in the market. But, the impact of damage is more difficult to gauge as it is a subjective consideration for each collector. What one collector considers to be a substantial problem may not be a major concern for another.

A well-known tenet of game theory is that mixing higher quality items with lower quality items lowers the perceived quality the whole group. As a result, ‘details’ or problem coins suffer a lower price on the market compared to similar but non-details (problem-free) counterparts. This effect is independent of the severity of the problem (or lack of severity).

While there are certainly more problems than those covered here, we’ve covered some of the main ones to watch for. Go carefully when dealing with problem coins.

Next: Coin Condition Part 3: Beyond the Grade – Eye Appeal